History of the Lines

History of the Carmarthen to Aberystwyth

The first proposals for a railway in West Wales were set out by the Manchester and Milford Railway Company in 1854 with a scheme to establish a rail link between Manchester and Milford Haven. Liverpool docks were becoming increasingly congested and the potential of a deepwater port in Southwest Wales, connected by direct railway to the north was an attractive prospect for the Lancashire merchants and industrialists.

Meanwhile the South Wales Railway was being built westwards from Swansea towards Haverfordwest, and reached Carmarthen in 1859. At that point, the Carmarthen and Cardigan Railway came into being with the aim of linking the two towns, and plans were laid for the development of a deepwater port at Cardigan. The line was opened northwards from Carmarthen to Cynwyl Elfed in 1860 and by 1864 had reached first Pencader and then Llandysul. At this stage, the Manchester and Milford Railway took over and extended the line northwards through Lampeter and Strata Florida which was reached in 1866. It had been originally intended to drive the line across the spine of the Cambrian Mountains via Llangurig and Moat Lane to link with the Cambrian Line that had been built westwards from Shrewsbury. Short sections were built, but these were never connected and eventually the scheme was abandoned in the face of spiralling costs and increasing technical difficulties in the mountainous terrain. So the line turned northwest from Strata Florida towards the coast reaching Aberystwyth in 1867, which itself had been connected to the Cambrian Line three years previously.

In its heyday, the railway was popular with farmers for livestock freight, milk and cheese production, and the availability of farm machinery. Animals could be transported long distances quickly and safely to meet demand. Livestock marts in Llanybydder and Llandysul were well known and flourished with the availability of the train service. People in the countryside would commute to Aberystwyth or Carmarthen to do their shopping. Lecturers in St David’s College, Lampeter, regularly used the train, and travelled from afar to deliver lectures on the campus. Yet the railway never achieved its original aim of linking Manchester and Milford Haven, and the company itself went into receivership in 1875. A protracted period of uncertainty and acrimony followed, but the line was eventually taken over by the Great Western Railway in 1906.

The closure of the line happened in stages, being lost first from Aberystwyth and then working southwards. Passenger services ended prematurely in December 1964 when flood damage by the Ystwyth River eroded a small part of the track bed near Llanilar, and for a short period northbound services terminated at Lampeter The flood-damaged section was never repaired and, with the Beeching cuts, the entire line was closed to passengers in 1965. However, freight services continued until 1970 to the creamery at Pont Llanio, and to the Felin Fach and Newcastle Emlyn creameries until 1973. The entire line was closed in 1973 and the tracks lifted in 1975.

In the north, the Carnarvonshire Railway connecting Afon Wen, a junction on the Cambrian Line between Pwllheli and Porthmadog, to Bangor was opened in 1862. The line had two branches, one from Caernarfon to Llanberis and a second from Penygroes to Nantlle. The former was constructed by the Carnarvon and Llanberis Railway, while the latter was part of the narrow-gauge Nantlle Railway which ran between Caernarfon and Nantlle, and which had been incorporated into the Caernarvonshire Railway. The line was first operated by the London and North Western Railway (LNWR) and then by the London, Midland and Scottish Railway (LMS).

The Llanberis branch closed to passengers in 1930, but ran summer excursions between 1932 and 1939, and again from 1946 until 1962. As was the case with the Aberystwyth to Carmarthen railway, the line eventually fell victim to the Beeching cuts and was finally closed in December 1964. Passenger services between Bangor and Caernarfon lasted until 1970, but this section too was eventually closed in 1972. However, in 1997 a section of the original line from Caernarfon to Dinas was incorporated into the reopened narrow-gauge Welsh Highland Railway as part of the first phase of that redevelopment. The restored line over the whole distance between Caernarfon and Porthmadog was completed in 2011. 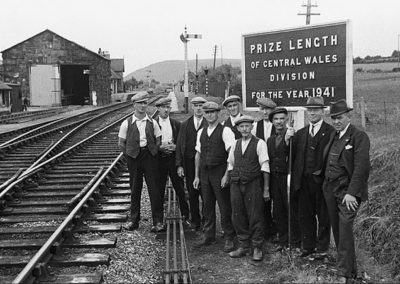 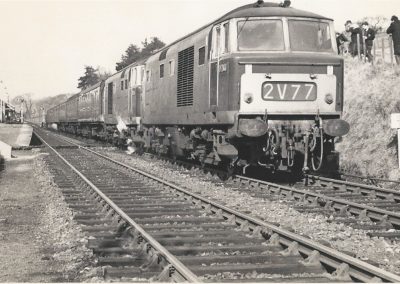 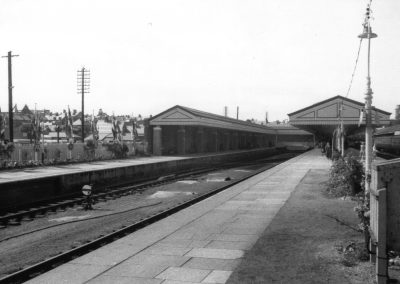 Aberystwyth station in the 1950s showing the bay platform used by trains to and from Carmarthen. 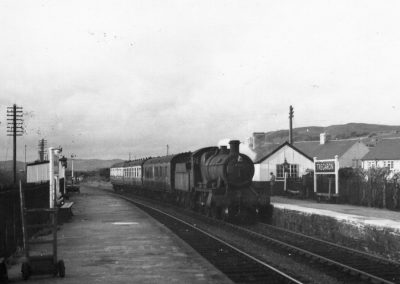 An Aberystwyth to Carmarthen service arriving in Tregaron c. 1950s