The campaign group Traws Link Cymru was formed in 2013 with aims to reinstate the railway lines between Aberystwyth and Carmarthen, and Afon Wen and Bangor, both of which were closed to passengers in the 1960s under the programme of Beeching Cuts to the British rail network (Figure 1). Mid- and West Wales are currently some of the most deprived areas of the United Kingdom and, indeed, of Western Europe. Yet this region has considerable potential in terms of tourism and agriculture; it has an employment pool that could service a wide range of small and medium-scale industries; it has three university campuses and several linked colleges of further education on seven campuses; it has the National Library of Wales; the Royal Commission for Ancient and Historic Monuments; the headquarters of the S4C television channel; and it has a rich and diverse cultural history.

Realising the potential of this region requires, vision, planning and inward investment. But the poor communications network remains a major drawback. The current road system is inadequate for the region’s needs, and while the existing railway links eastwards from Bangor and Aberystwyth, and east and west from Carmarthen, are both well-used, they do little to improve regional connectivity.

Traws Link Cymru has argued that new railway lines between Aberystwyth and Carmarthen and Afon Wen and Bangor could provide the stimulus needed to kick-start economic and social regeneration throughout the region. Moreover, a railway line running from Bangor in the north to Carmarthen in the south would not only provide an important transport link between industrial South Wales and the rural north, but it would also bind the country together to produce a more integrated Wales. As such, these new railway lines would have considerable strategic and political significance. 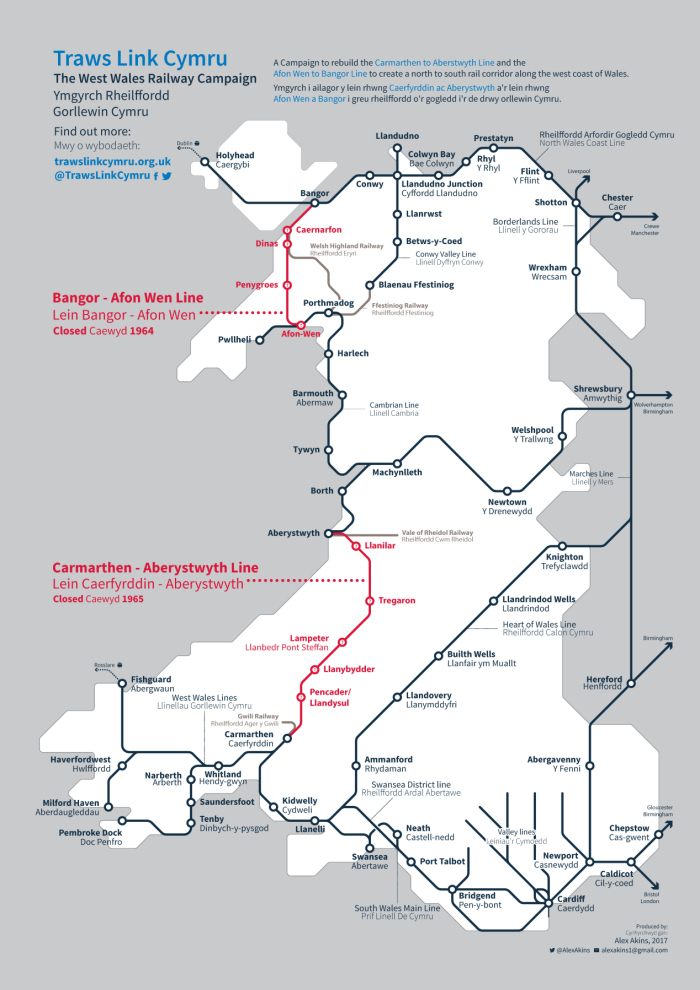 As a campaigning group, we have limited funds at our disposal. But we incur costs for organising meetings, for advertising, for printing of campaign materials and for maintaining the website. Many groups, institutions and individuals have made generous contributions to the campaign, but we would be grateful if others would do likewise. If you would like to help us reinstate the Carmarthen to Aberystwyth and Afon Wen to Bangor railway lines, a financial contribution would be appreciated.

You can donate directly by cheque or by debit or credit card, or you can make a contribution through our crowdfunding page (coming soon).

If you support Traws Link Cymru’s aims to reopen the railway lines in West and North Wales, please write to your local Member of the Senedd or Westminster MP, or to your County, Town or Community Councils.

Members of the committee include:

The committee can be contacted on the “Contacts” page of our website.